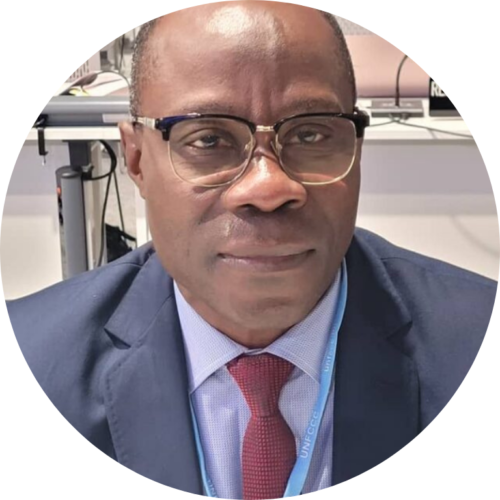 Dr Eng. Aboubakar Mambimba Ndjoungui is the Deputy Director-General of the Gabonese Agency for
Space Studies and Observations (AGEOS). After obtaining his scientific baccalaureate from the Immaculate Conception Institution in Libreville, Gabon, he joined the National School of Geographical Sciences in Marne La Vallée (France) in 1990 where he obtained an Engineering Diploma in Geographical Sciences, specialist in satellite remote sensing. He enrolled after the engineering degree at the University of Marne La Vallée (France) and at the Pierre and Marie Curie University (France) for a PhD in image processing.

In 2010, he held the position of head of the satellite applications department of the company GAEL Consultant (Paris) which works for the European Space Agency and develops software for the quality control of satellite data. Dr. Aboubakar has participated in several projects: Use of satellite images for the verification of farmers&#39; declarations within the framework of the European Common Agricultural Policy (CAP); the production of the European mosaic of Landsat 7 ETM+ images; the research for fossil waters by combining satellite images and in situ data in the Kufrah basin in Libya; the development of algorithms for improving the spatial resolution of multi-spectral images, etc. Dr. Aboubakar was recruited by the Institute of Research for Development (IRD) in Montpellier as project manager for the construction of infrastructure and the establishment of AGEOS in 2011. Since November 2015, he has held the position Deputy Director General of AGEOS in charge of infrastructure and external relations.